What's the return on investment of loyalty marketing?

As the Covid-19 recession continues to bite, your organisation is probably looking hard at where you can save costs. And it’s a fair bet marketing spend has been one of the focus areas. Fair enough – boards and executive teams  are being forced to identify the highest return on investments, marketing spend included.

So where should marketers turn to maximise return? Is it in advertising? In retail offers? Branding? Maybe it’s in customer service? Or product innovation?

It’s also good for the bottom line. A study by Bain and Company showed that increasing customer retention rates by just 5% increases profits anywhere from 25% to 95%. “Return customers tend to buy more from a company over time. As they do, your operating costs to serve them decline. What’s more, return customers refer others to your company. And they’ll often pay a premium to continue to do business with you rather than switch to a competitor with whom they’re neither familiar nor comfortable.”

So when you’re under the pump, it’s a smart move to invest in your existing customers, turning them from casual to frequent, and frequent to loyal. How do you do that?

Earning customer loyalty is a complex business. A study by KPMG in 2019 showed that loyalty is earned through multiple factors, from product quality and price competitiveness to corporate transparency and customer service.

But a loyalty programme is not the same as loyalty itself, says Australian loyalty expert Adam Posner. “Loyalty is not a programme. The programme is the tool that drives the outcome. Loyalty is expressed when people love a brand, when they have an affection that goes beyond the mere transactional. In a technical sense, I describe it as the intersection of behaviour and belief, where the behaviour is the transaction and the belief is the emotional connection.”

That said, there is strong evidence that loyalty programmes do what they say on the tin – they engender loyalty.

In 2017 McKinsey & Co showed the top performing loyalty programmes in the USA changed customer behaviour, most powerfully by increasing frequency and choosing one brand over another (see the chart).

Another study, by LoyaltyOne, which spanned four continents and surveyed 1,200 companies, found that 95% of firms reported greater spend by member customers than non-member customers. A quarter of those said members spent four times as much as non-members. (see the graphic).

And the scale of spend is large. “On average, loyalty programme members contribute almost half (43%) of companies’ annual sales.”

These are impressive results. But there’s a catch.

Adam Posner points out that these figures don’t decisively point to the effectiveness of loyalty programmes. “Loyalty programmes by their very definition attract and reward loyal customers. It could be that these customers were going to be loyal anyway, whether or not there is a programme.”

In which case, the scheme could be adding cost – not improving it, right?

“Yes, exactly,” says Adam. “For the programme to be successful it needs to create additional loyalty, and not just a little bit – it’s needs to more than enough to pay for itself. If not, it’s a just another cost.”

So is there evidence that loyalty programmes can create this additionality?

Yes. One of the most definitive studies on loyalty programmes was published in the Journal of Marketing in 2007. The study was unusual because it was able to track a new loyalty programme being launched by a national retail chain. It focused on the first two years of a 1000 customers and observed nearly 50,000 transactions.

The results of the study do indeed perform as Adam just described: the launch of the loyalty programme seemed to have little effect on the shopping behaviour of the most loyal customers. They were going to shop like that anyway. Perversely though, the most loyal were also most likely to claim their rewards.

So far so costly for the chain store. But the study goes on. “In contrast, consumers whose initial patronage levels were low or moderate, gradually purchased more and became more loyal to the firm. For light buyers, the loyalty programme broadened their relationship with the firm into other business areas.”

Check out the graph below. It shows the powerful effect of the programme in doubling the moderates and tripling the light shoppers.

The paper concludes: “This supports the argument that loyalty programmes can accelerate consumers’ loyalty life cycle and make them more profitable customers.” 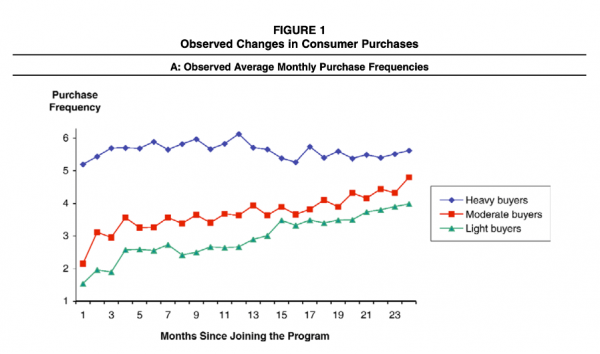 Loyalty programmes work. But it seems how much they work depends on what you’re trying to achieve. Are you trying to create emotional connection with existing loyal customers? Are you trying to turn casual customers into heavier shoppers? Do you want to create emotional warmth with a surprise and delight strategy? Or maybe reinforce the brand purpose with aligning your programme with a charity?

So what are you trying to achieve with your marketing spend? And how can a loyalty programme help you?

First published in StopPress on 9 October 2020